Simpson's stopper, Myrcianthes fragrans, generally grows as a shrub or small tree up to 25 feet tall.  It is vary variable in form, and also can be pruned into any shape desired. It's formally pruned in many parking lot hedges, which is kind of too bad, since the constant whacking back vastly reduces flowering and fruiting. So even though many people in South Florida see it regularly, they don't notice it. On the other hand, the resulting dense growth produces a good nesting place for mockingbirds.

The Simpson's stopper in the front yard could be healthier, which is worrisome.  It's one of my very favorite plants, and it plays a vital ecological and esthetic role in our yard. Anchoring the front landscape design (such as it is), is not the least of its virtues. If it goes, it will leave a big hole.

It started out as a multi-trunked containerized plant. I liked the outward spread of the trunks, so I left them. As it grew, I removed lower branches, partly because they were intruding on the path. The open, tiered canopy that developed is one of the plant's charms now. I just wish it were a bit fuller. "Limbing" it up also reveals the gorgeous bark, sometimes a perfectly smooth pale tan, as though it were sanded, and at other times turning reddish and peeling, a little like a crepe myrtle. The smooth bark phase is likely the source of one common name, "naked-wood."

Removing lower limbs also keeps the landscape more open and less-congested. It makes a nice screen between us and our neighbors to the left, but it isn't so dense that I can't see through it to their magnificent large Opuntias or the houses across the street.  No matter what your viewpoint is, you can see through and beyond the plant, so you are tempted to explore further. One of these days I am going to relocate one of my waterlilly pots so that birds can flit down for a drink or bath, and then retreat into the protective shade of the stopper.

The plant is evergreen, with opposite, mostly ovate leaves about 1 to 8 cm long,  and 1 to 4 cm wide. They are tough and leathery, with slightly underturned margins to reduce water loss. Depending on sun exposure, the leaves range from bright yellow-green to dark olive. The underside is a paler green. The leaves are covered with small glands, which appear as bumps on the upper side and as black or green dots on the underside.  I've never noticed any fragrance emanating from the leaves like it does from firs or spruces. Crushing the leaves, though, releases a fresh minty aroma something like eucalyptus oil. That's not surprising, since both are members of the Myrtle family, Myrtaceae.

In contrast with the leaves, the flowers really live up to their species epithet,  fragrans.  The plant blooms and fruits several times a year, depending on rainfall and temperature. When Simpson's stopper is in flower the air around it is filled with a spicy sweetness somewhere between the heavy, almost cloying odor of gardenias and the light, fleeting sweetness of citrus. When it is flowering I visit it several times a day, especially in late afternoon or early evening, just to breath deeply, as though I somehow could capture an olfactory  memory. Who needs mind-altering drugs when it is possible to wallow in pure sensation just by standing near a fragrant shrub and inhaling?

The all-white flowers grow in clusters on stalks that arise in the angle between leaf and stem. I think normally there are 5 tiny petals, though the one in my sketch above has 4. The numerous fine white stamens provide the main attraction, though. They practically obscure the petals, and a Simpson's stopper in full bloom looks like  the fairy godmother has waved her sparkle-trailing magic wand over it. The flowers are constantly humming with various pollinators, including beetles. Butterflies don't seem particularly fond of them, though. 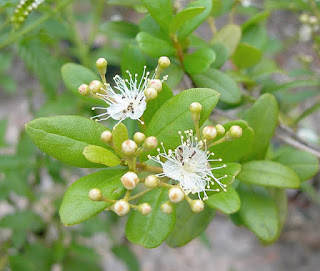 Flowers give way to rounded or somewhat pear-shaped fruits, often borne in pairs  - hence another common name, "twinberry stopper." They eventually reach a size somewhere between a blueberry and small olive, starting out green, then passing through yellow and orange stages before their final bright red. Mockingbirds gorge on the fruits, and if they happen to be frequenting the yard at the time, bluejays and cardinals also gobble the berries. The fruits are edible, somewhat sweet and not too dry, but for me leave an unpleasant bitter aftertaste. Volunteers pop up around the yard, evidence of the bird's activities. The plant also suckers, and probably could be propagated by severing them, too.

Apart from its other virtues, the Simpson's stopper functions as a kind of activity center in the yard. Even when they aren't feeding, birds like to perch on its branches. One July morning I made notes of what was going on around me while I sketched the fruits. I sat quietly enough that a mockingbird that had been flushed by my initial setup returned to the opposite side of the plant to continue eating. A shiny June beetle had its head stuck into a fruit, so intent on gorging that it let me manipulate foliage around it to make a photo. You can see a bit of my finger at the top of the photo.

Small bees and wasps buzzed amid the foliage and remaining flowers. Two other species of beetles were devouring fruits. Two strange insects that I couldn't ID were mating in the shrub's interior. A green darner dragonfly reconnoitered in search of prey or just patrolling its territory.

I am wearing out the phrase, "superlative native plant," but that is because so many Florida native plants are, indeed, superlative. From its undemanding nature, repeated flowering and fruiting, glossy evergreen foliage, wildlife and landscaping value, Simpson's stopper certainly qualifies. It needs little water or fertilizer after it is established, and ours has survived major hurricanes Wilma and Irma with minimal damage. Though it gets pretty well defoliated by the salt-laden wind, it recovers quickly.

It is named in honor of Charles Torrey Simpson (1846-1932), a noted South Florida plant explorer, snail expert, naturalist and nature writer. True stoppers are in the genus Eugenia, which also is in the Myrtle family. Simpson's stopper resembles them superficially, hence the most common common name.

Posted by Jeanette Atkinson at 9:07 AM

"Where do you go when all the fair places have been ruined? Where do you go from Florida?"
Raymond F. Dasmann. No Further Retreat: The Fight to Save Florida. MacMillan. 1971.